Begin 2022, Belnet will start the roll-out of its new future-proof BNIX platform. Our current platform still has sufficient capacity, but we are staying proactive and looking further ahead, given that data flows will only continue to increase in the coming years.

In 1995, when BNIX was set up, it was not more than an interconnection between some ISPs. More specifically, it was an old Cisco AGS+ type router with a maximum bandwidth of 20 Mbps. This router had eight gateways, thus limiting the number of participants. One year later already all the gateways were in use and new requests had to be denied pending an upgrade to a 3Com type Ethernet switch with 32 gateways and a bandwidth of 100 Mbps per gateway. 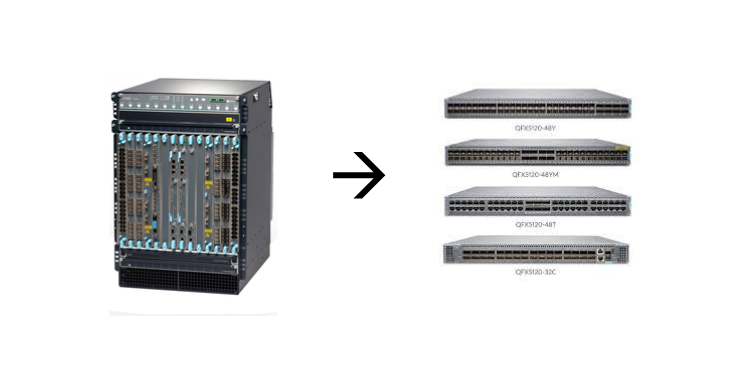 As the internet evolved more and more towards a commodity, the demand for more bandwidth increased exponentially. This resulted in the deployment of bigger chassis and having a presence in professional data centres across Brussels. In 2010, the first 10Gbps capable switches were installed (Force10). What seemed an exotic flavour at the time, evolved to a standard port for most participants. The same can be expected for 100Gbps ports, so we are already looking at 400Gbps ready switches. We are no longer betting on 1 big chassis to relieve the customer demand, but are opting for 1 U switches that are easy stackable. This provides a flexible platform that is scalable in the future with minimum overhead.

Because the current hardware was getting at the end of its lifecycle, the momentum has come to rethink the design with our eyes on the future. The current research phase is looking into EVPN-VXLAN as the basics of the new design. This gives us a technology where the scalability of the BNIX is easier to achieve, without the fear of the Layer2 caveats (Spanning Tree, anybody?). The current generation of hardware also provides a lower CAPEX and a smaller footprint. We are looking at Juniper QFX5120, probably in combination with a couple MX chassis for extra intelligence.

This means that it will be easier in the future to expand the possibilities of the BNIX. We have more flexibility to geographically expand our presence, increase port density or meet specific customer demands such as private VLANs and a reseller program. All of this without losing the robustness and stability for which the BNIX is known for.

If you would like more technical details, you can always mail to stefan.gulinck@belnet.be. By the time of the next BNIX event, the design should be finished and validated, so more information is yet to come.

Would you like us to keep you updated on the BNIX network, new partners and participants, new services, upcoming events, etc.
Subscribe here to our newsletter
Did you find this news interesting?